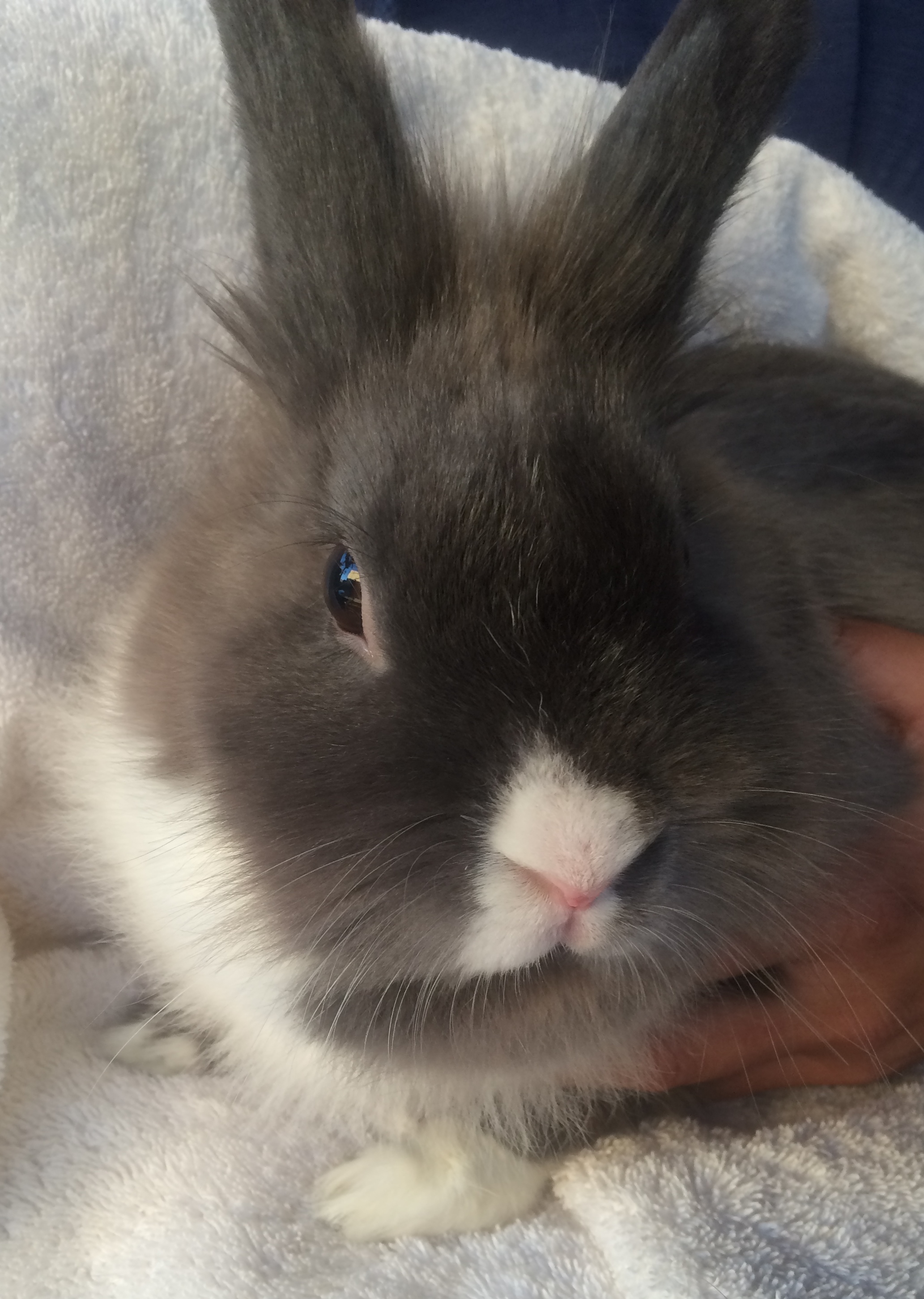 Chicory during our first meeting.

Is a Classroom Rabbit a Good Idea?

For many people, their first exposure to rabbits was the classroom rabbit. There may have been a small hutch, cage or crate with a bunny or two inside in the corner of the room. This may have been in biology class or maybe in an elementary or preschool. For me, my high school biology teacher had 3 hutches with rabbits. Most of those rabbits were incredibly shy and panicked whenever someone stepped near their hutch.

Many reputable rescues will not adopt out their rabbits to anyone who intends to house the bunnies in a classroom. Experience has proven this usually leads to a miserable existence and a drastically shortened lifespan for the rabbit. Why is this so? There are a few factors which do not make a classroom an ideal place. 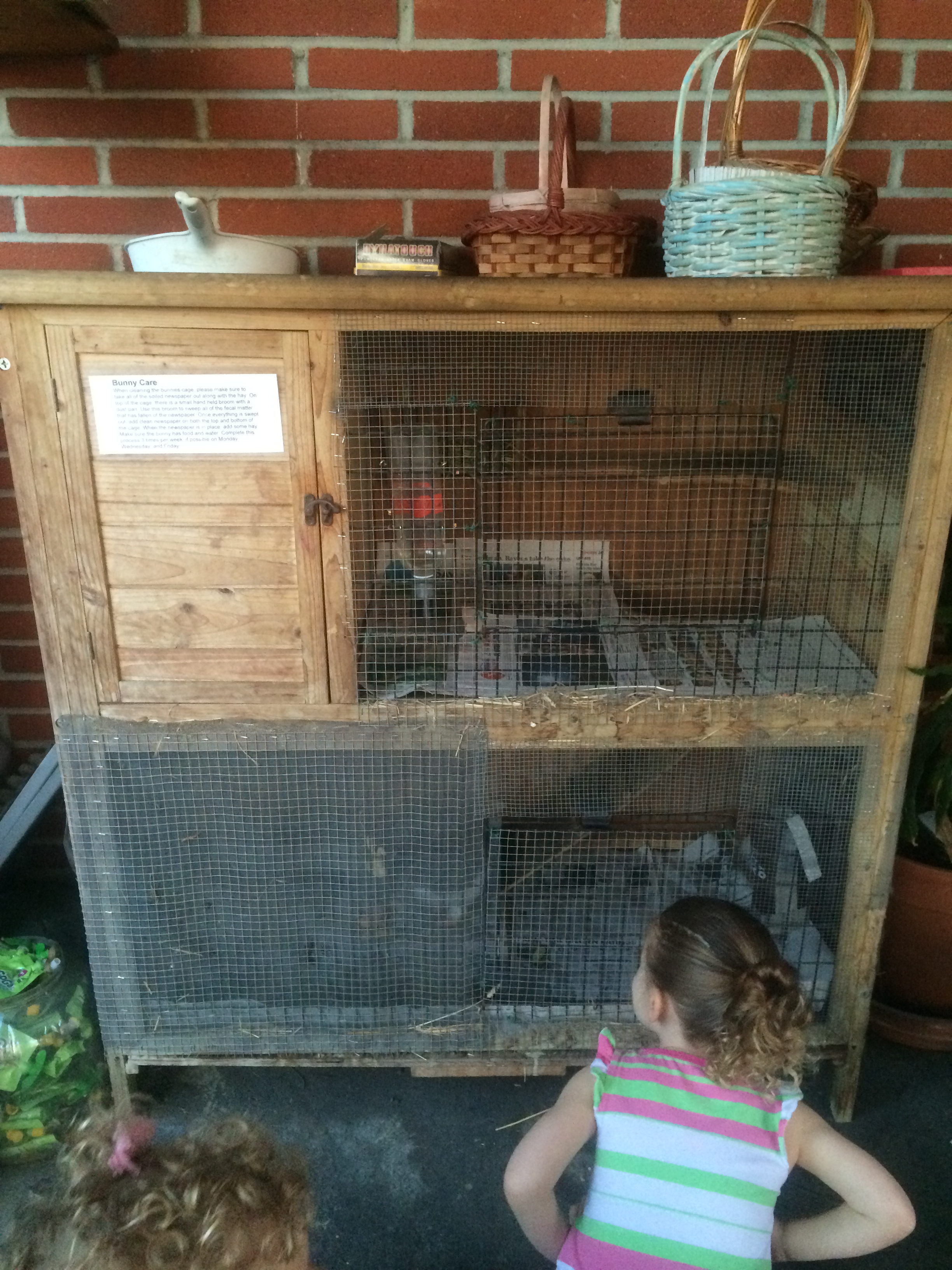 Chicory's hutch in the preschool where she lived for a few years. She was housed on an outdoor patio.

I was first alerted to Chicory from one of the physical therapy vets BunnyLuv uses. One day our vet learned that there was a classroom rabbit at the preschool her children attended, and she knew the bunny was not in an ideal setting. She spoke to the teacher, who agreed to let BunnyLuv rescue the bunny.

I arrived at the school and saw the bunny housed in a small hutch on an outdoor patio. I could see a half-eaten corn on the cob and a water bottle hanging in the corner. The bunny was hiding in the box. I could get only a little bit of information on the bunny. The parents shared responsibility in purchasing food, and there was no consistency in what was purchased or how often. Normally whatever was on sale was bought. No one really knew how old the rabbit was, how long it had been at the preschool, if it was a he or she, or even if the bunny had a name. No one knew anything about this rabbit.

I took the bunny out and confirmed she was a girl. She was a pretty grey and white lionhead, but she was really scared. The nails were long, as they probably had never been cut. I trimmed them right there and put her in the carrier I had brought with me.

I set her up in the office at the shelter. She got a nice big litter box, hidey box and towel. It did not take her long to become comfortable enough to venture out of the hidey box and explore her surroundings. I decided to name her Chicory. It seemed to suit her.

Since very little was known about her, I made an appointment for her to have a check-up and get spayed. Fortunately, one of the vet techs at the clinic took an instant liking to her and asked to adopt her. It was an amazing stroke of luck. I was able to visit her one more time to have her adoption paperwork signed and say goodbye. It was a happy ending to a stressful beginning. Sadly, not every classroom bunny has a chance at a beautiful life.

Having a rabbit visit a classroom or workshop is a better alternative, if you wish to expose kids to different animals. I have conducted several presentations in schools with kids of all ages and it has always been a great experience. Kids are usually very excited to meet the rabbit, and it's a great way for them to learn how to take care of them. This short time allows them to ask questions and become engaged in a discussion.  It also emphasizes rabbits as a valuable family member, rather than a forgotten commodity at the back of the room.