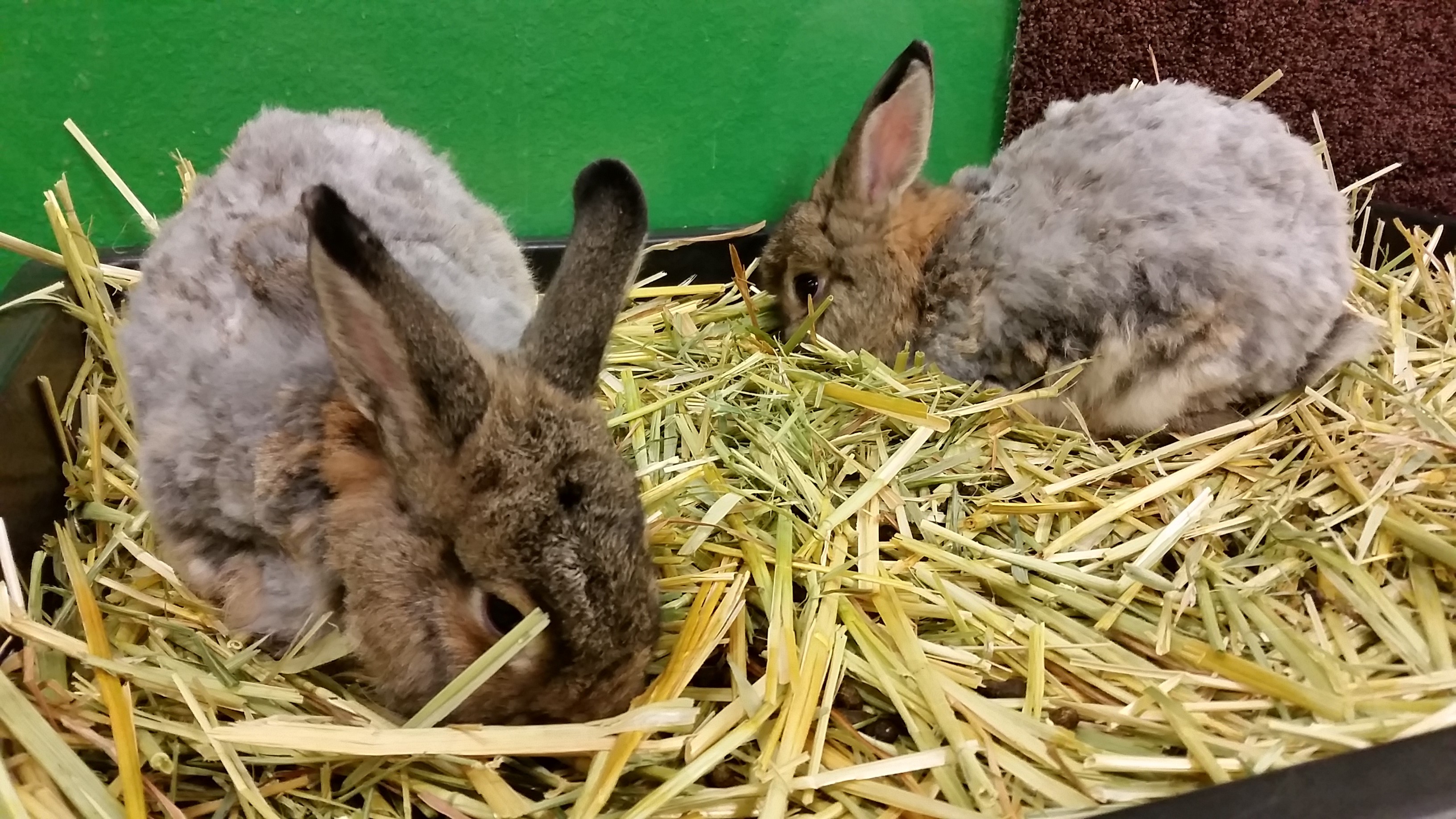 Cats will use litter boxes strictly for bathroom purposes, while rabbits often think of their own boxes as a place to also eat and nap. Keeping these different purposes in mind, do not set up a rabbit litter box the same way as you would set up a cat box (or use cat litter).

Over the years, I’ve experimented a little with boxes. I’ve had a litter box that just had some bedding and I spot cleaned it daily, while I had a separate box for just hay. Oso, in particular, had a blast jumping into the pile and creating a hay cave. Of course, I checked the hay box daily to make sure he didn’t also use it as a litter box. After awhile, it just seemed obvious to combine the two. 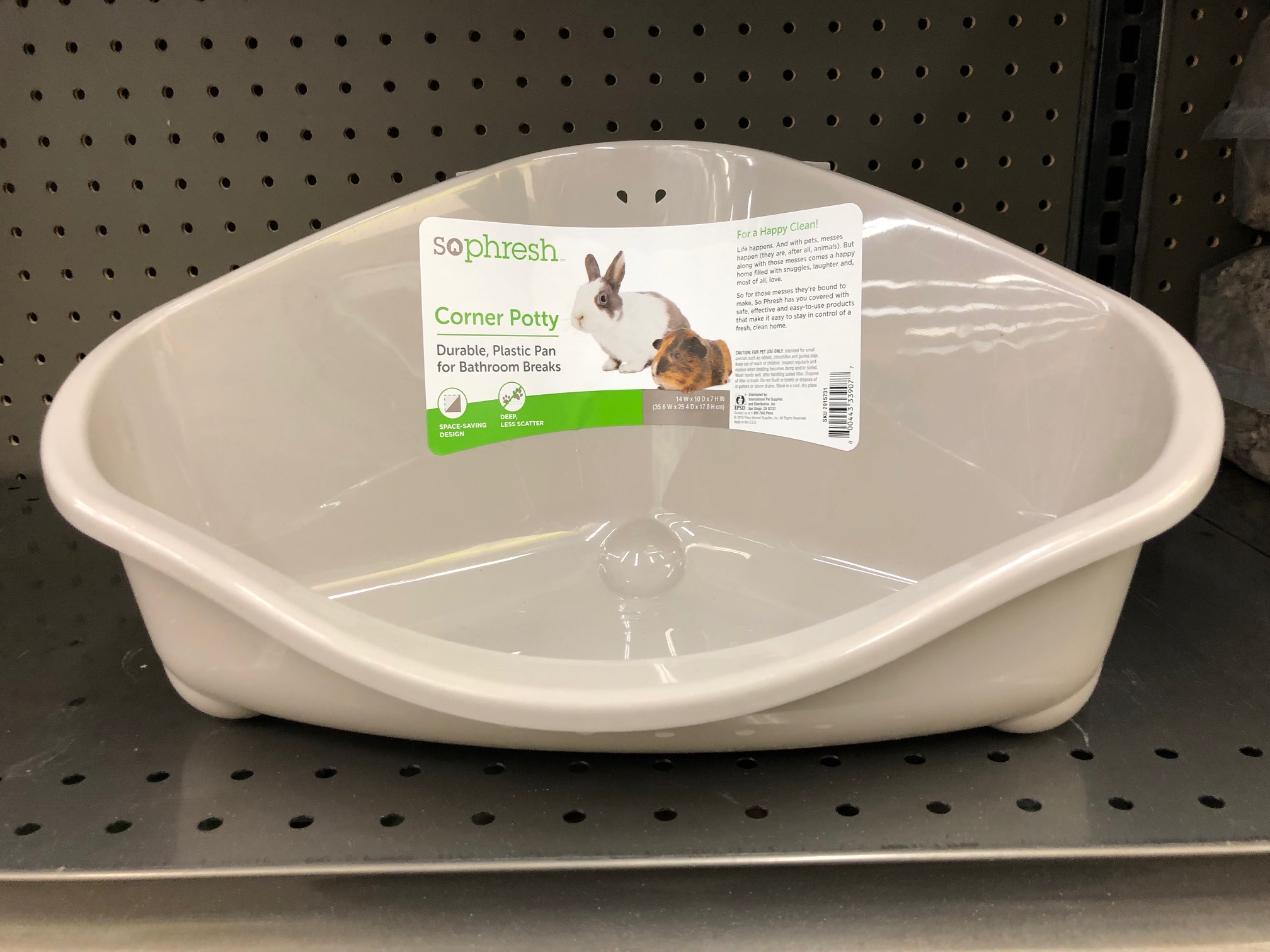 Corner litter boxes can be found in most pet stores. They can come in different sizes and are meant to be placed in an enclosure such as a cage.

Most rabbit litter boxes you see in the 'Small Animal' section at pet stores are corner litter boxes as shown on the right. They come in different sizes and are meant to be placed in a cage or condo type of enclosure. The front is lower than the back, giving the bunny easy access. The back sometimes has a hook to fasten to the wires of the cage or condo (which, in theory, should be easy to keep the box secured - but in reality - is not, since not all cages and condos are a standard size). If a condo is part of your rabbit set-up, then a corner box may be useful. However, I would not recommend this to be your only litter box as this is too small to accommodate all of your rabbit's needs and you will be cleaning it daily. 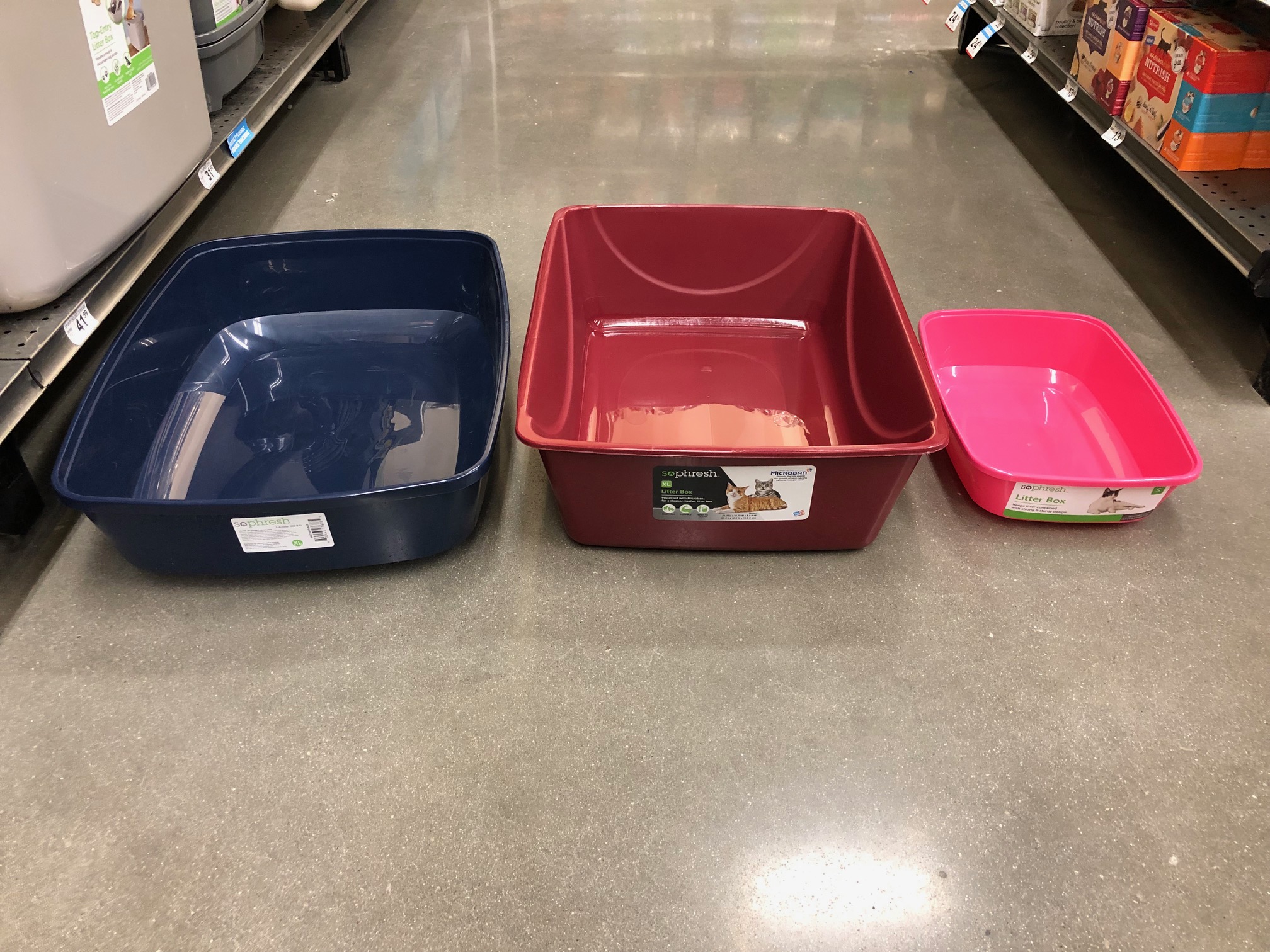 Three typical litter boxes that can be found in the 'Cat' section of any pet store. They are made out of hard plastic and easy to clean. 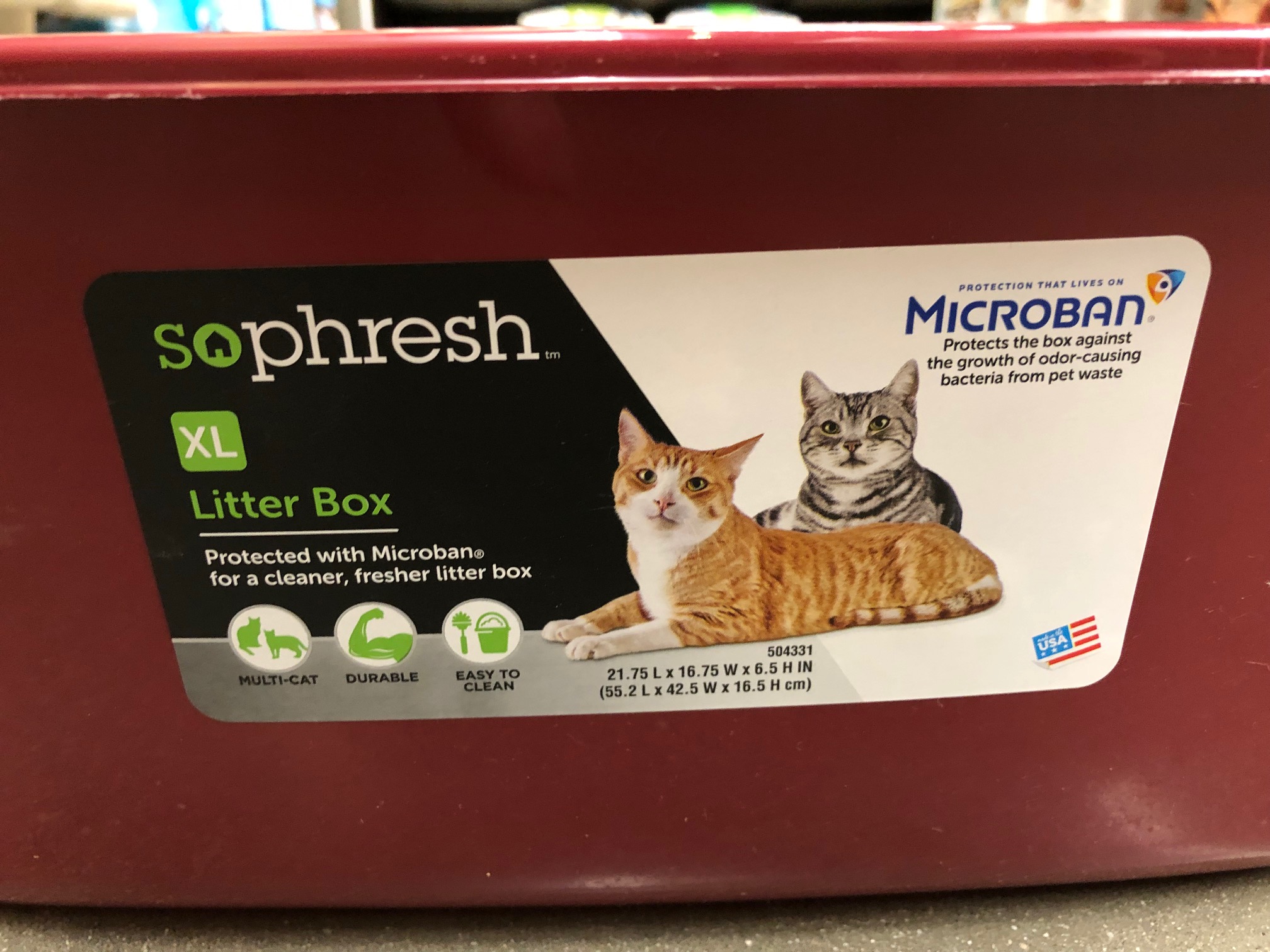 Appropriate sized litter boxes will be found in the 'Cat' section of pet stores. The minimum size you should be looking for is approximately 22L x 17W x 6.5H inches (55L x 43W x 16.5H cm). There may be some variation between different manufacturers, but this is good for one medium-sized rabbit, up to approximately 8lbs (or 3.6kg) or two small rabbits, up to 5lbs (or 2.27kg). These boxes fit well in exercise pens or in a corner of a room where the rabbit lives, and is appropriate as a main litter box.

The box shown on the right is probably one of the smallest cat boxes sold at pet stores. This is too small to be a main rabbit litter box, but may be appropriate to place in a hallway (or a corner in a room where your bunny is allowed to exercise) or to use in travel carrier.

Thinking Outside the Box 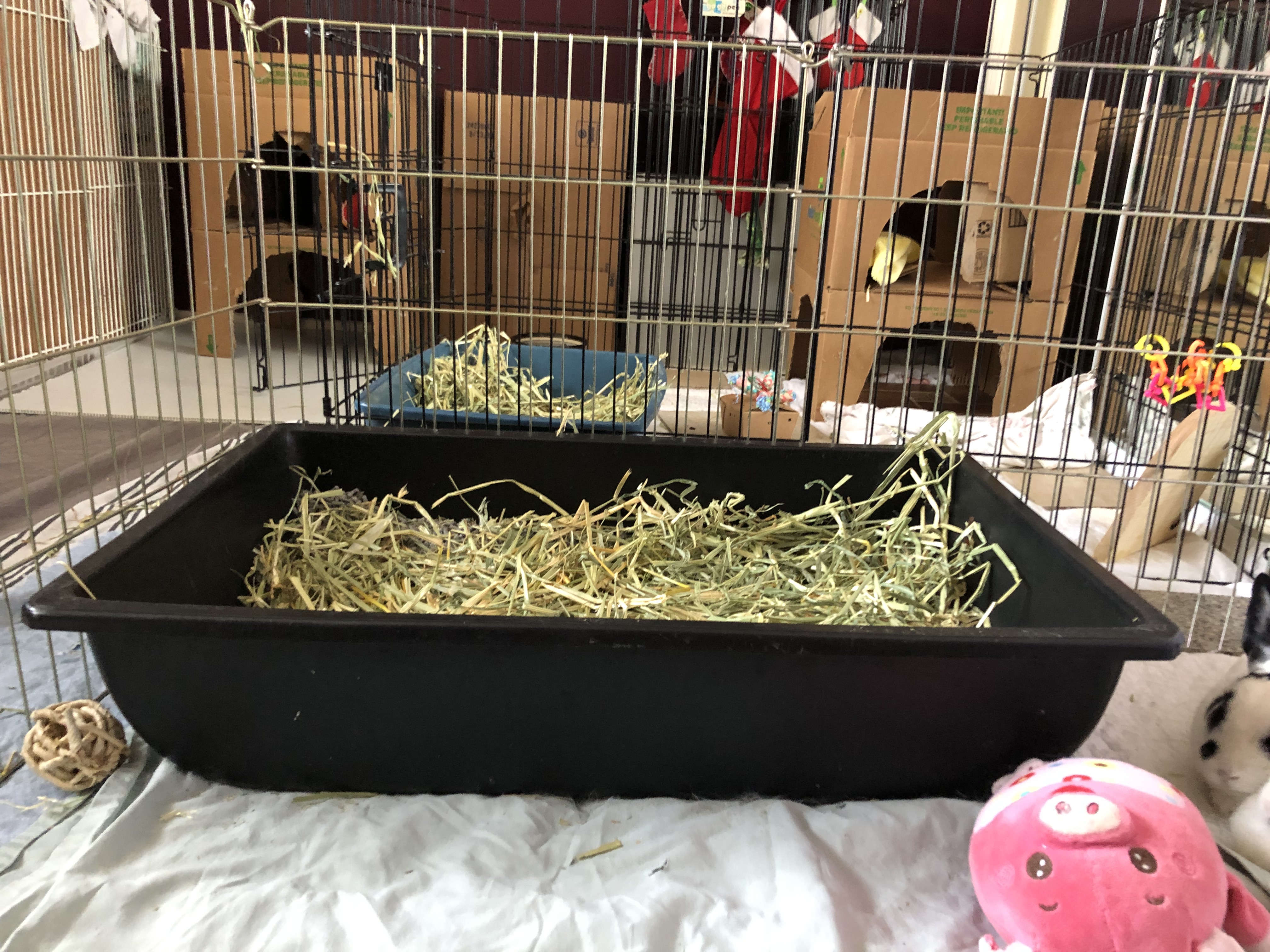 Sometimes you have to think outside of the box. My group of 5 shared a litter box that was about 32"L x 21"W and 6"H. The box was a cement mixer that I bought at Home Depot. The size was certainly not something I would have found in a pet store. In reality, you can use any plastic container as a rabbit litter box. If you cannot figure out what size you need, I would try for bigger rather than smaller, for a number of reasons. First, if the box is too small, you will need to change it more often. Second, the bunny needs to fit in it. Lastly, as mentioned at the beginning of the article, bunnies like to do lots of different things in the box. They like to organize the hay just right. They like to nap in it, dig in it and they like to eat in it. Make sure the box is big enough to accommodate all those activities. 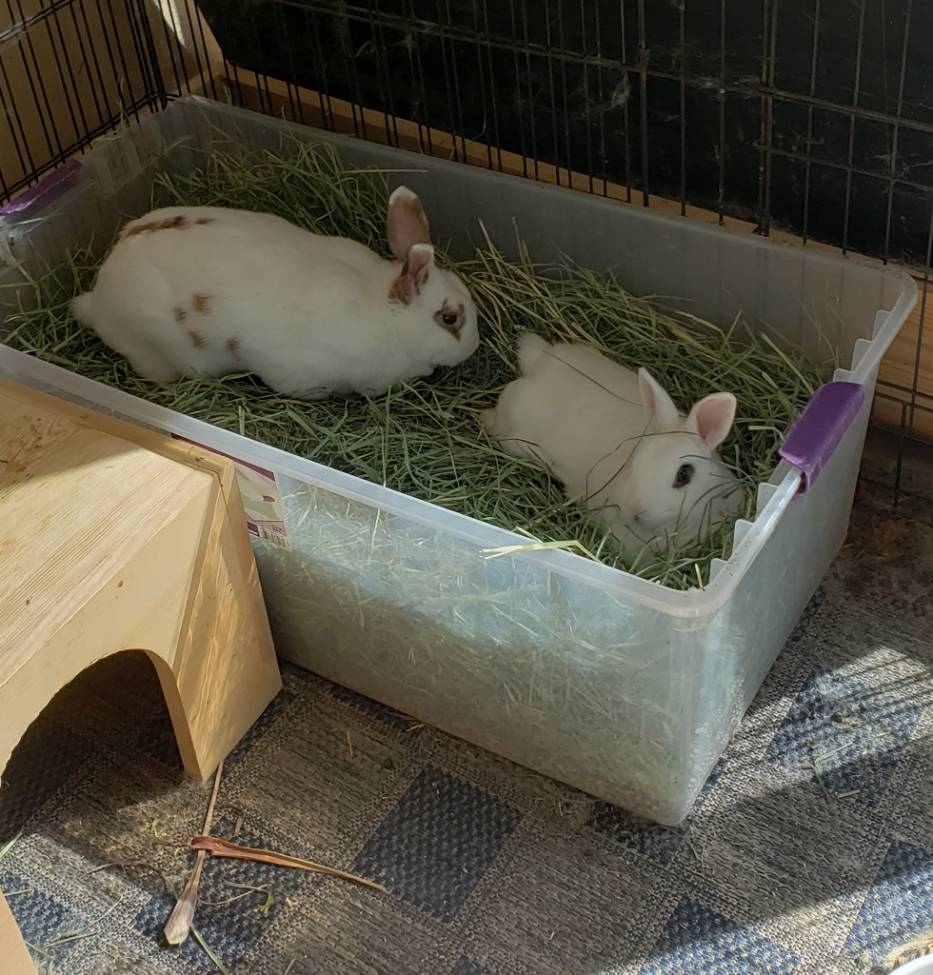 Lillian Kruse uses a regular storage bin (which can be bought at Target, Home Depot, the Container Store or online at Amazon) as a rabbit litter box. She wanted the box to be deep to accommodate her bunnies love of digging. She places a wooden box (a Lil Tower from Paw Kreations) next to the bin, so the bunnies can easily go in and out of the litter box. Photo by Lillian Kruse. 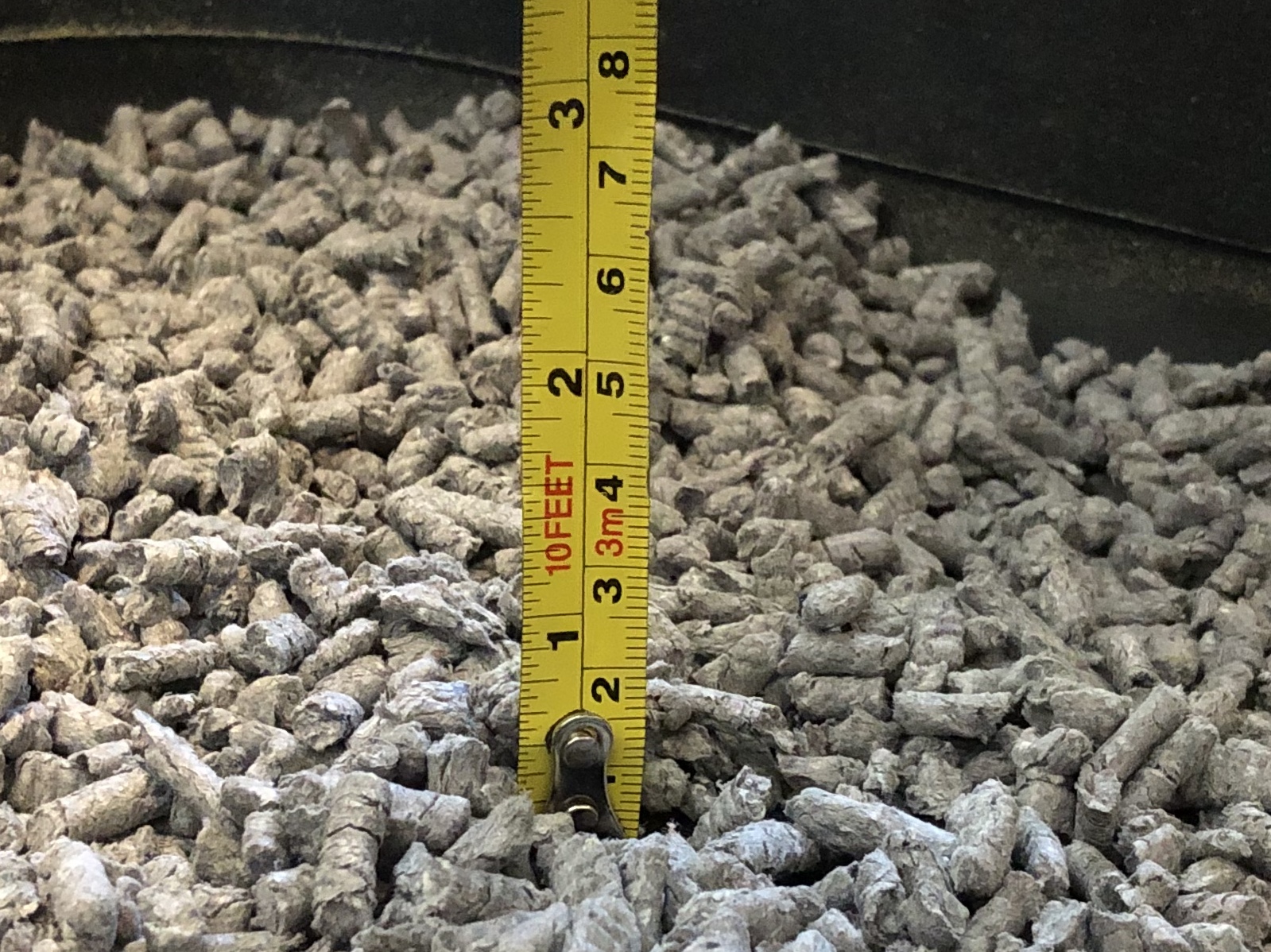 How do you make up a rabbit litter box? Cover the bottom of the box with about a quarter to a half-inch of rabbit-safe bedding (click here to read more about bedding). I would put a handful of extra bedding in the corners as rabbits often have a favorite corner in which to urinate. Top off with about a shoebox full of hay. The hay is an important part of the litter box. Rabbits, being herbivores, are grazers. If you think about other herbivores, such as cows and horses (or if you think of deer or similar wildlife), you see them continually eating in pastures. Herbivores do a lot of eating and pooping at the same time. Placing hay in a litter box encourages rabbits to do their eating and pooping at the same time. This is why litter box training does not take much effort on your part. However, this does not mean rabbits will eat soiled hay. It is important to make sure the rabbit has ready access to fresh, clean hay at all times.

Do you have to put hay in the litter box? Yes and no. Hay in the litter box is the best way to make sure your bunny has plenty of hay in their diet, plus it compliments their natural behavior. However, in some of my pens, I have multiple boxes. For example, when my trio have their free time outside of their pen, I have a small litter box available that has just the rabbit-safe bedding in it with no hay. This is because this is just a small box and not a major place in which I feed them hay. 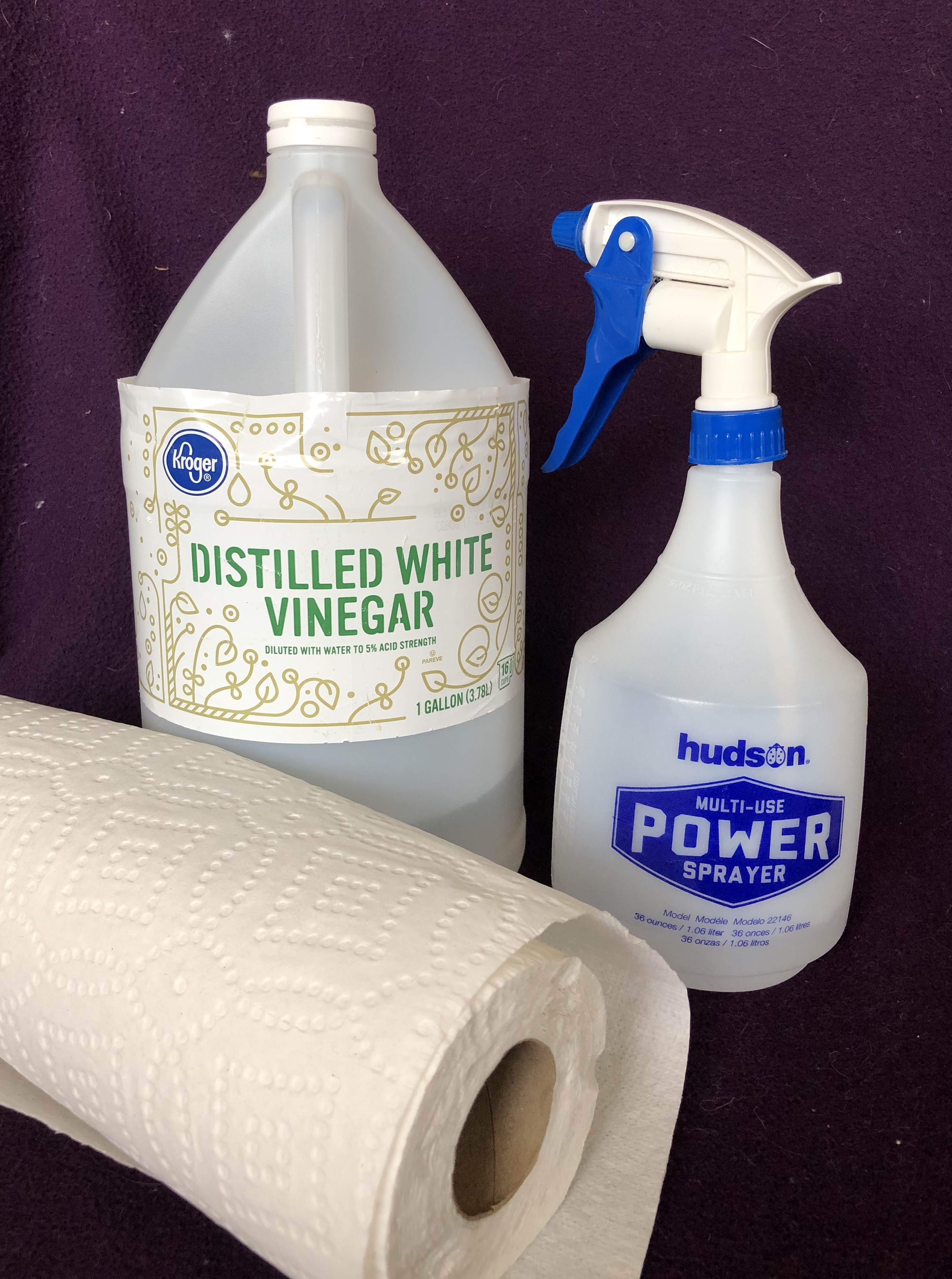 Vinegar, along with paper towels or rags, is all you need to keep your rabbit litter box clean.

How often do you need to change the boxes? That depends on how sensitive your nose is, what sort of bedding you are using, how big of a box you have and where the bunnies live and how many. If you have them sitting next to you in the dining room or den, then you may want to clean it out more frequently. That also goes if you use newspaper for bedding. Newspaper is a cheap source, particularly if you get a steady stream of weekly flyers in the mail all the time. The downside is that they don’t absorb odor very well and you will need to change out the litter box completely every 2-3 days. I use a recycled paper pellets for bedding and I will change it once a week. Changing involves dumping out all of the contents of the box, spraying the box with simple white vinegar and letting it sit for 10 minutes, wiping it clean and then refilling the box with bedding and hay. Fresh hay needs to be added daily.

Does a rabbit ever stop using a litter box? It can happen, especially when a rabbit is sick or elderly. For example, a normal adult urinating outside of the litter box may indicate a urinary tract infection or other possible problems with the bladder or kidneys. An older rabbit may have some trouble jumping into a box and may be reluctant to use it. Both situations warrant a trip to your vet to check on the health of your bunny.

In the case of old age and arthritis, you can cut one side of the box so the bunny can just walk in. Yes, you can use the kitchen scissors to cut through the hard plastic, but neither your hands nor the scissors will appreciate your dedication to your rabbit. An easier solution may be to purchase a puppy training box like shown below. It’s much bigger than those typically available for small animals.