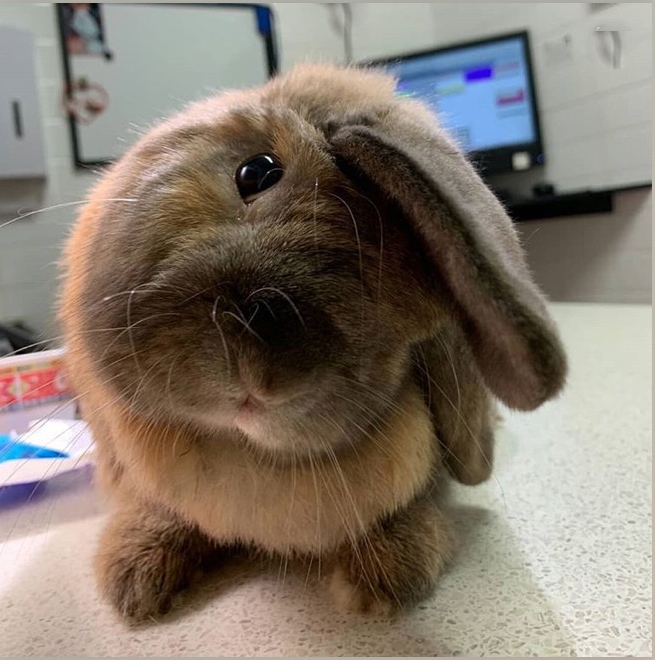 Roger ready for his check-up. Photo from The Unusual Pet Vets.

Although head tilt in rabbits looks strange, it is not unusual. It's a vestibular disease, meaning the inner ear and the part of the brain which controls balance and eye movement are damaged. The result is a head that is tilted 90 degrees or more, difficulty standing and an unsteady gait.

It's not necessarily a fatal condition. Depending on the cause, many bunnies make a partial or full recovery, provided they receive prompt medical treatment and the owner is willing to give supportive care. For those bunnies who do not straighten, they adjust to their new normal and continue to experience a good quality of life. 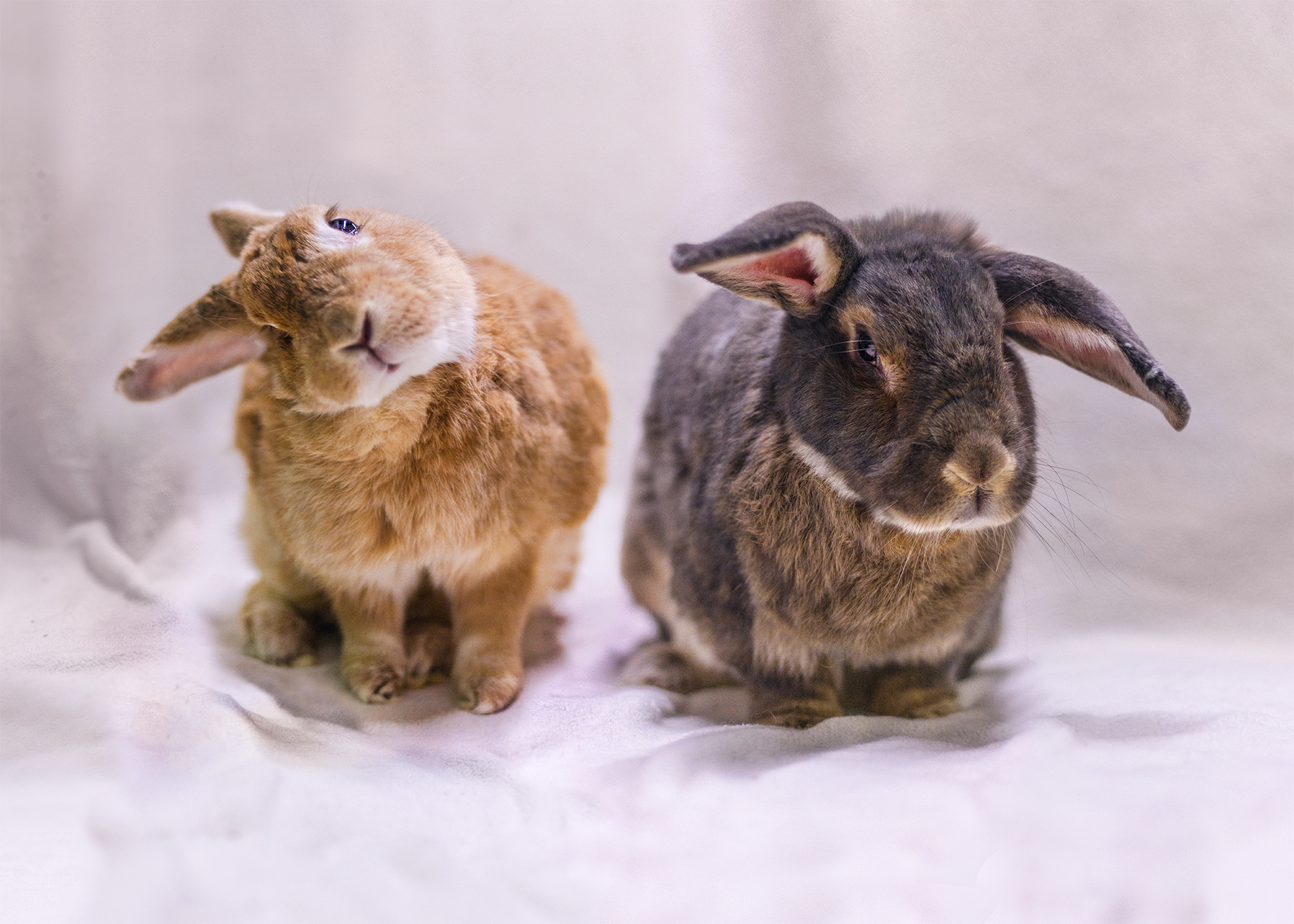 Both Poppy (left) and Twink (right) have had head tilt at one point in their lives. Although Twink was able to make a full recovery, Poppy remained tilted.

The signature twist of the head is not always the first sign a rabbit is experiencing head tilt. Often, the initial signal is an unsteady gait, circling, stumbling and even unsuccessful leaps into the litter box. Rolling may not happen at first either, but begin a day or two after the initial observations. The rabbit often moves as if intoxicated. Initially, affected rabbits may or may not continue eating. They are reluctant to move and prefer to sit in a quiet spot. Common signs of head tilt in rabbits may include:

Causes of Head Tilt in Rabbits 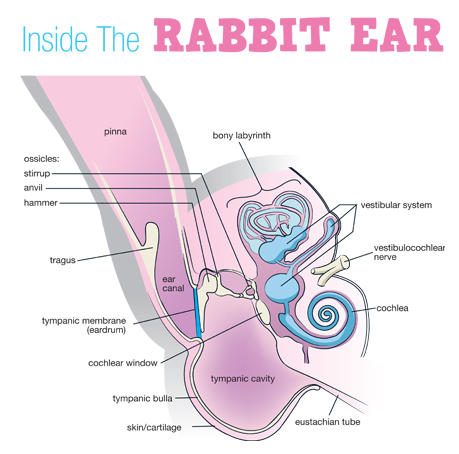 Head tilt in rabbits and loss of balance occurs when the inner ear is diseased or damaged. Image from Exotic Vet Care.

Since head tilt is a vestibular disease, the causes of head tilt in rabbits can be divided into peripheral, meaning involving the inner ear, and central (involving the brain)(Brown, 2006).

Any nystagmus will usually be horizontal, meaning that you can see the eye dart back and forth horizontally across the orb. Occasionally, rotational eye movements can also be observed.

Other less common peripheral diagnoses include:

Vertical nystagmus, meaning that the eye darts up and down the orb, can be seen. Occasionally the nystagmus may also be horizontal or even rotational which may seem confusing. However, vertical nystagmus is only seen with central disease. 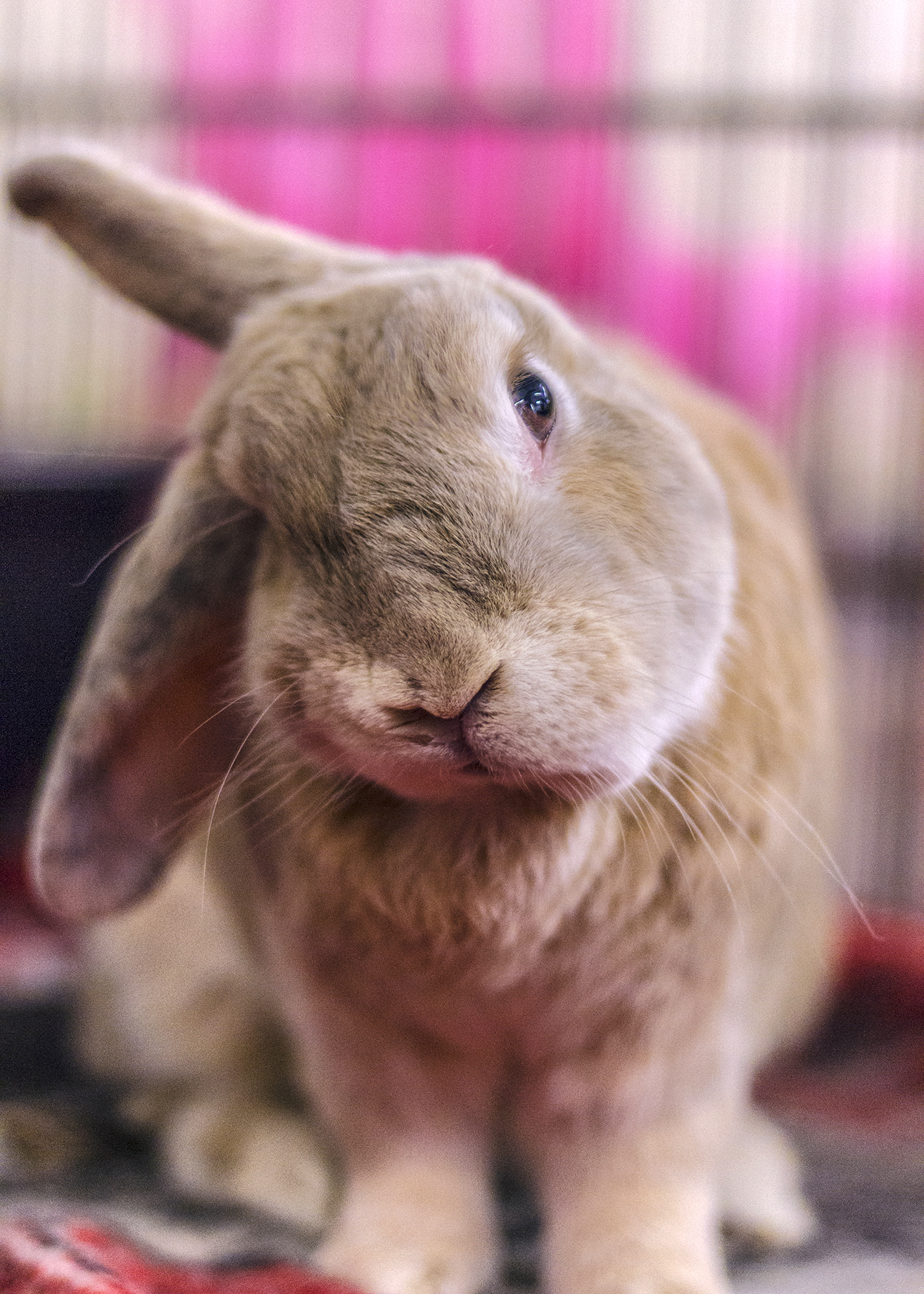 Although Harley had a tilt, he never let it interfere with his play. I would catch him jumping out of the second floor of his cardboard castle like it was no big deal.

Whether the disease comes from the inner ear, the brain or both locations, it is difficult for veterinarians to diagnose the exact cause of head tilt. These affected areas are not easily accessed, and therefore, figuring out the exact cause can only be determined post-mortem.

However, blood work, x-rays, CT scans, MRI and a careful physical examination are useful to pinpoint the most likely cause. Since the problem is usually a bacterial and/or E. cuniculi infection, many veterinarians will aggressively attack with a broad spectrum of antibiotics to kill both aerobic and anaerobic bacteria as well as fenbendazole (Panacur) to control the E. cuniculi. An NSAID, such as meloxicam (Metacam), will often be prescribed to reduce inflammation and provide pain relief. Steriods are typically not recommended as rabbits are very susceptible to the side effects, however, in rare and extreme circumstances, it may be helpful. Meclizine, which is an anti-nausea drug sold OTC as a motion sickness medication, can also be used. Whether a rabbit truly feels nausea or gains a benefit from this medication is unknown, but it can be safely administered.

The "down" eye (the eye pointing towards the ground) is more prone to injury and drying out. Eye lubrication is necessary.

Supportive care, such as syringe-feeding and administering fluids, may also be necessary, especially in the first few days of the disease. How often and how long supportive care is required depends on the bunny and the disease.

Long term antibiotics is essential. The minimum should be 10-12 weeks, however, you may need to administer medications for several months. Since there are few blood vessels traveling to the inner ear, it can take a long time for antibiotics to be effective. If there is no noticeable improvement after the first month, your veterinarian may switch antibiotics. Usually pain medication, fluids and Panacur are not intended for the entire treatment. Again, your veterinarian will determine the best therapy plan for your bunny.

At the initial onset of the disease, the bunny should be in a smaller space, such as a 2x4 exercise pen with the sides of the pen padded with rolled up towels. This is so the bunny doesn't have to move as much and it limits how often he rolls. However, as soon as the bunny shows signs of being stable, he should be encouraged to exercise as much as possible. The additional movement will help strengthen his sense of balance.

With appropriate treatment and care, a head tilt bunny can recover enough function to live his life normally. Even if permanently tilted, these bunnies can resume jumping into litter boxes and running down a hallway without danger of losing balance  and rolling.

Seek advice from your veterinary professional for any rabbit health issues and before administering any drugs!

Level up your rabbit knowledge from novice to expert. Sign up for the monthly newsletter, The Lettuce Letters!