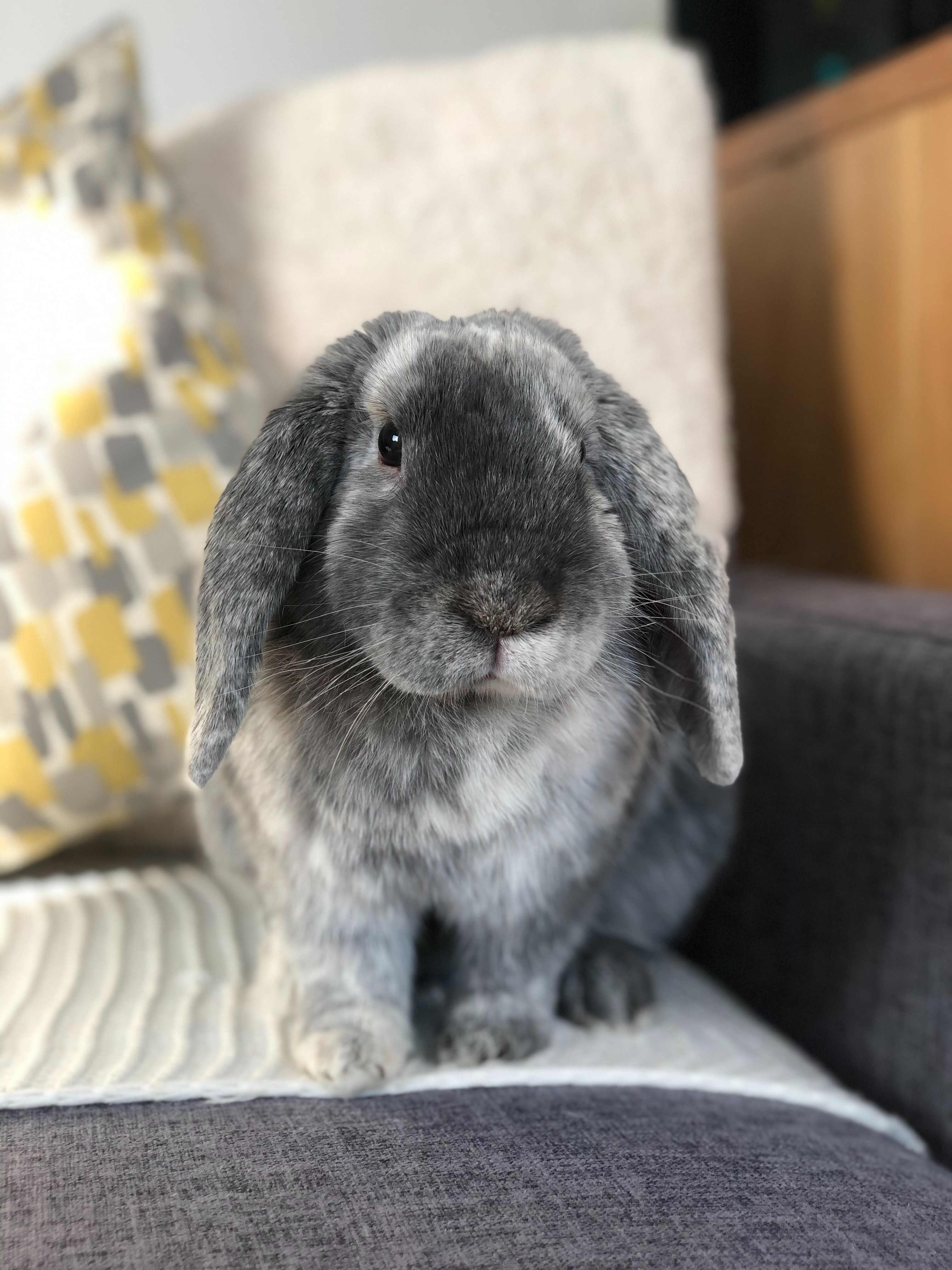 Photo by Matt Pike on Unsplash.

During my time at the shelter, I was frequently asked if rabbits have any sort of personality. For these people, their only interaction with a rabbit was peering into a box and seeing a pair of nervous eyes looking back at them. Frankly, they couldn’t understand why anyone would want such a skittish animal.

Rabbit personalities do exist, but bunnies generally elect to keep that nugget of information to themselves. Only when they feel comfortable around you, do they let themselves shine. Remember, rabbits are a prey species, and they view us as predators. Everything they do is tempered with caution. 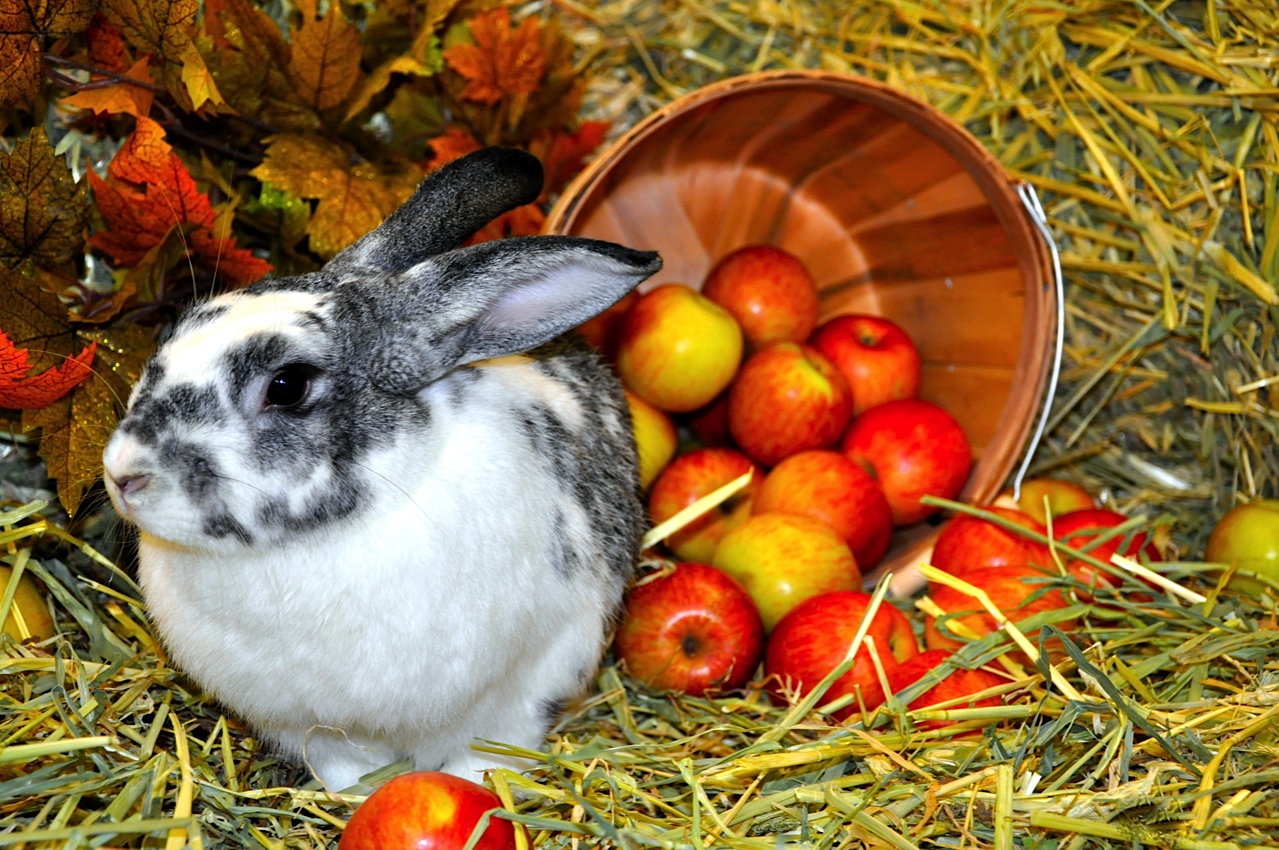 So how do you know what sort of rabbit personality you have?

The first step in figuring out your rabbit's personality is to establish a bond with your bunny. This can take some time, depending on what sort of situation the bunny is coming from and their age. 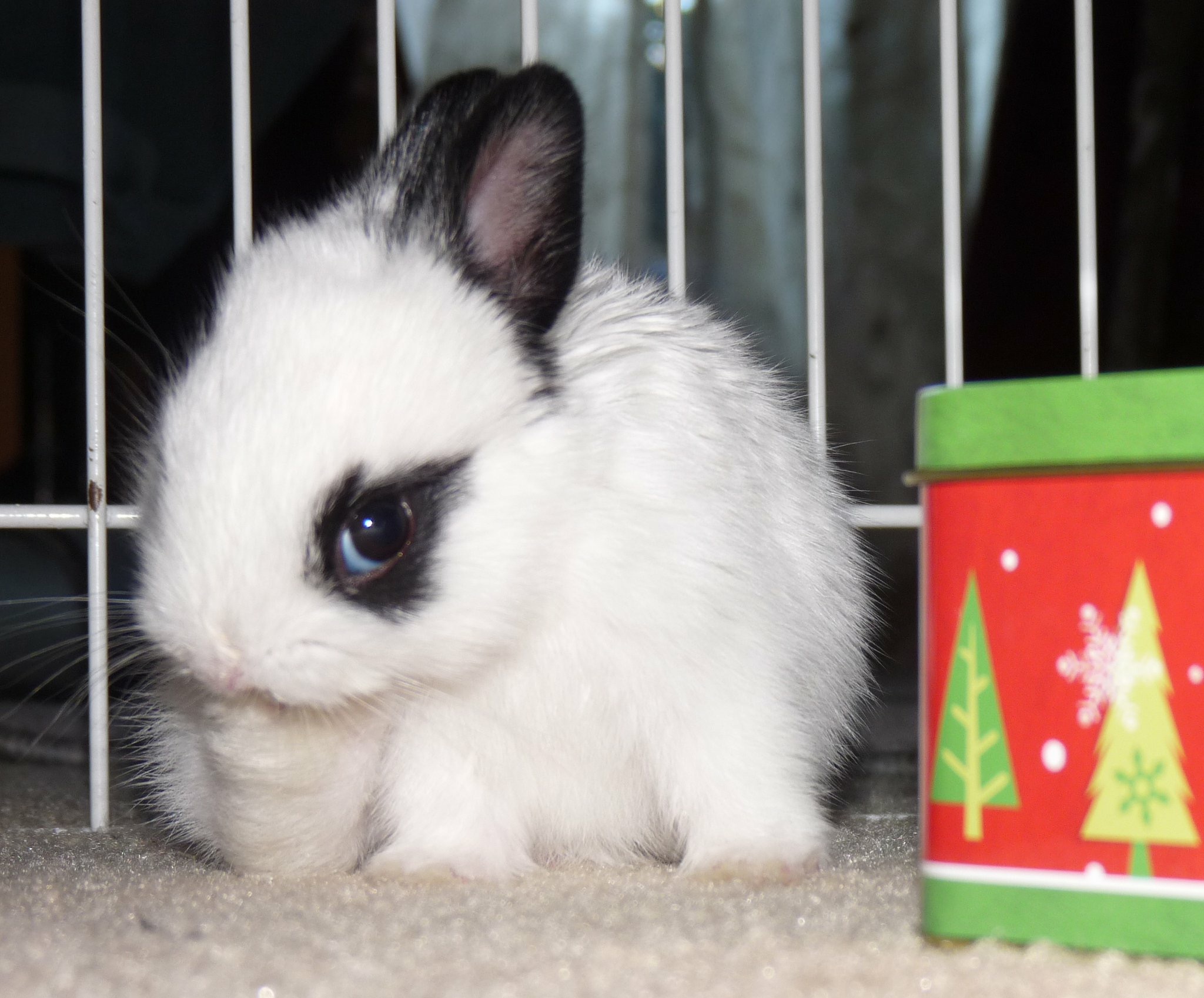 Rabbit personalities are just like human personalities - neither is 100% evident at birth. Babies up to 3 months old are (generally speaking) very trusting of people. They later shed that when they reach sexual maturity (about 4-6 months of age). They enter what I describe as the teenager phase - where they don’t want to hang out with their parents. They just want to do the bunny equivalent of sitting in their room, playing video games and listening to heavy metal. They are active, but don’t want to cuddle or be handled by you. They want to do their own thing, and you can't tell them what to do.

They settle down around 1.5-years - 2 years of age. By that time, the bunnies have settled into their personalities. I usually suggest that people with no rabbit experience adopt an adult at least 1.5 - years-old or older. Babies are ridiculously adorable, but can be a handful and easily overwhelm first-time owners. Adults have settled in their rabbit personalities and are less likely to overtake their owners with their antics. Once a bunny reaches their senior years (usually around 7-8 years), they may mellow out further. Actions, which would have made them grunt, nip and box you at a younger age, may just earn you a dirty look. However, I have met many bunnies who don’t even consider slowing down until they are at least 10 or 11 years old.

Note: A lot of people believe that if they get a baby bunny, they will socialize that baby to love their owners. They think the rabbit will think nothing of being picked up, held and spending all of their time hanging out with their owners. Yes, socialization can help the rabbit feel comfortable in the home and with owners, but there is no guarantee you will have a 5lb floppy-eared ‘dog’. If you happen to have a people-orientated rabbit, that's wonderful, but if you don’t, that needs to be OK, too.

Effects of Environment on Rabbit Personalities 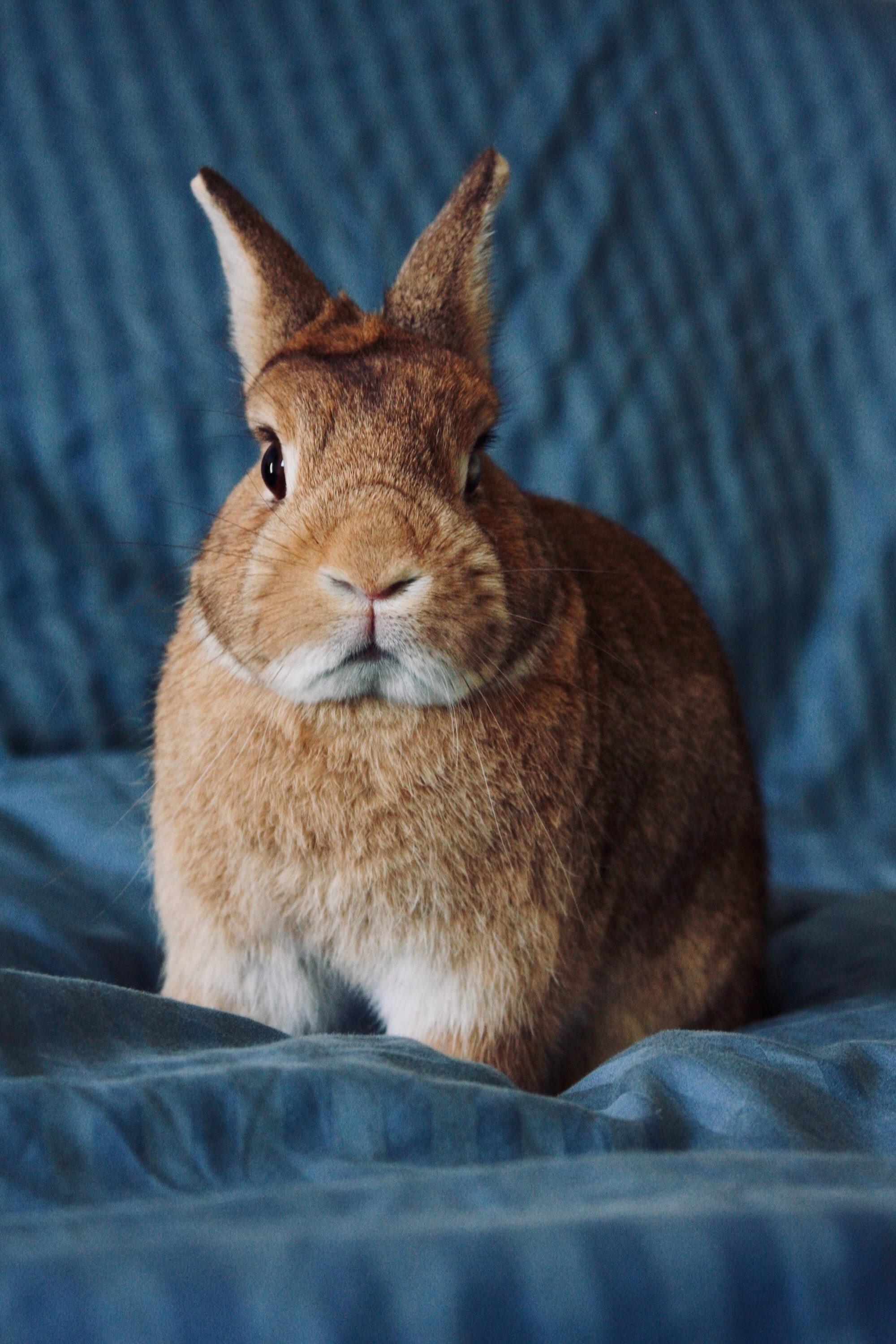 Lots of sass in that look!
Photo by Melanie Kreutz on Unsplash.

If you rescued your bunny from the outdoors or adopted one from a shelter or rescue, it might take them time to settle down and feel safe. This is even more true if the bunny was mistreated by former owners or came from a laboratory. City and/or county shelters and humane societies will usually have bunnies in small cages. Depending on how much of a priority the rabbit area is to management and how many dedicated volunteers they have for the rabbits, the bunnies may only have minimal contact with people, or their cages may have been placed next to a row of barking dogs. It’s important to note that rabbits in shelters - even those living in a nice rescue with a dedicated staff - may not all handle a shelter environment very well. They may be frustrated and angry by the small space, the lack of exercise time, or they may be frightened by the large number of people who come in trying to touch them through the cage door or peak at them through their hidey hole. This does not mean that their rabbit personality is aggressive or excessively shy. Quite often these rabbits will settle down and become more friendly and outgoing once they have been adopted and adapt to a home and with a family.

How long does it take for an adopted rabbit to relax? It depends on the rabbit, but I would be patient. For some rabbits it can take months; others, a few weeks. Please note, this advice is applicable to all species. 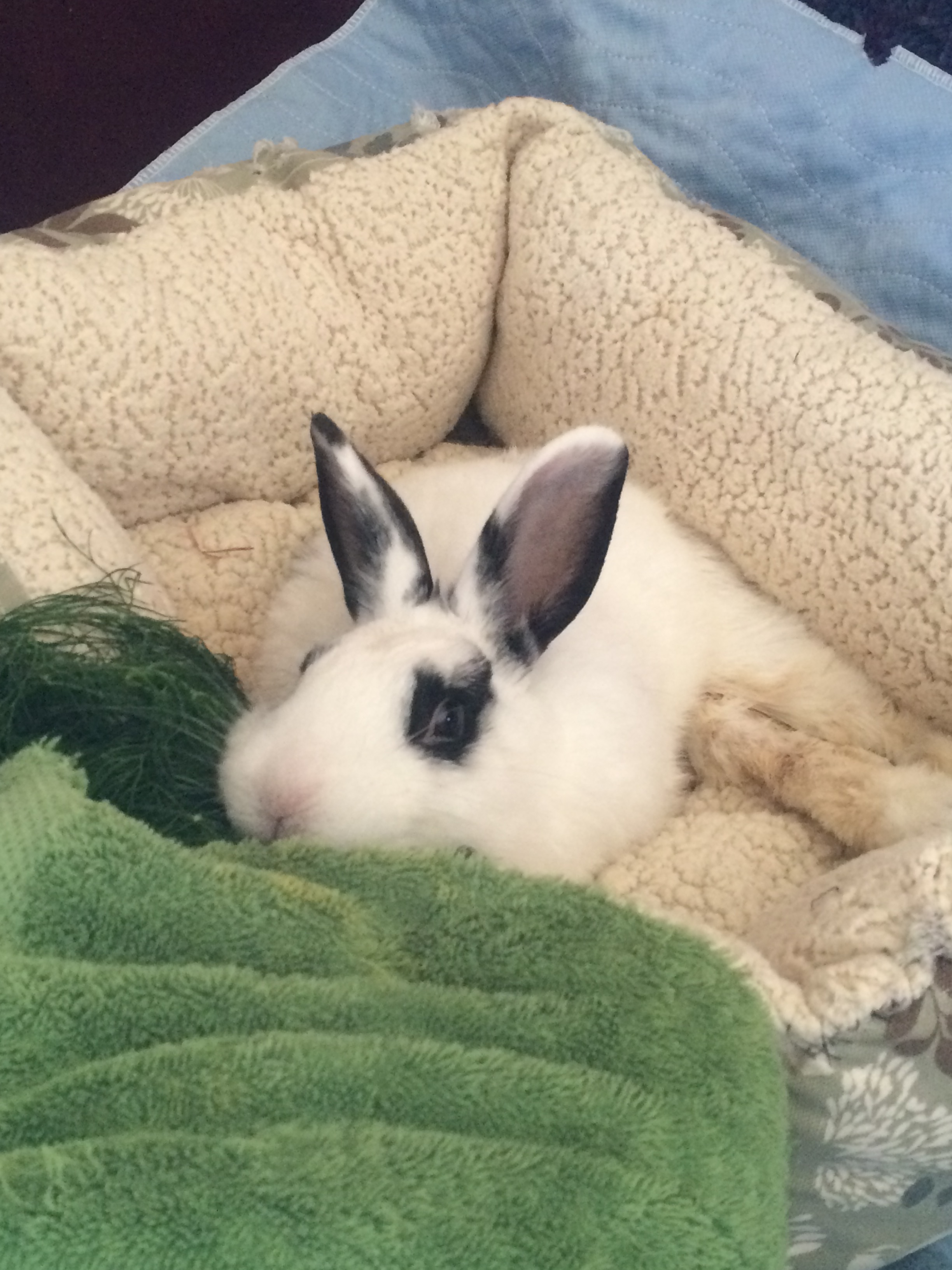 To establish a bond, you need to set a routine and get your bunny to trust you. When I started getting to know my first two bunnies, I would let them out of their condo to explore their room. In the meantime, I would take my book, lay on the floor and read while they jumped all around me. They learned quickly that I was not a threat to them. In fact, they could be downright sassy and it would be OK (yes, thank you for eating my book, Whoppy). Sometimes I had a treat for them, which was even better. I would rarely tackle them for snuggles. They were not cool with that, but they were fine with some petting. It didn’t take them long to be comfortable with my presence or with the other members of the household. They learned they were in a safe and comfortable environment. The humans were OK, and the bunnies could be themselves. They felt comfortable enough to play with toys, explore, interact with me or simply take a nap in peace. This is when their rabbit personality shines. 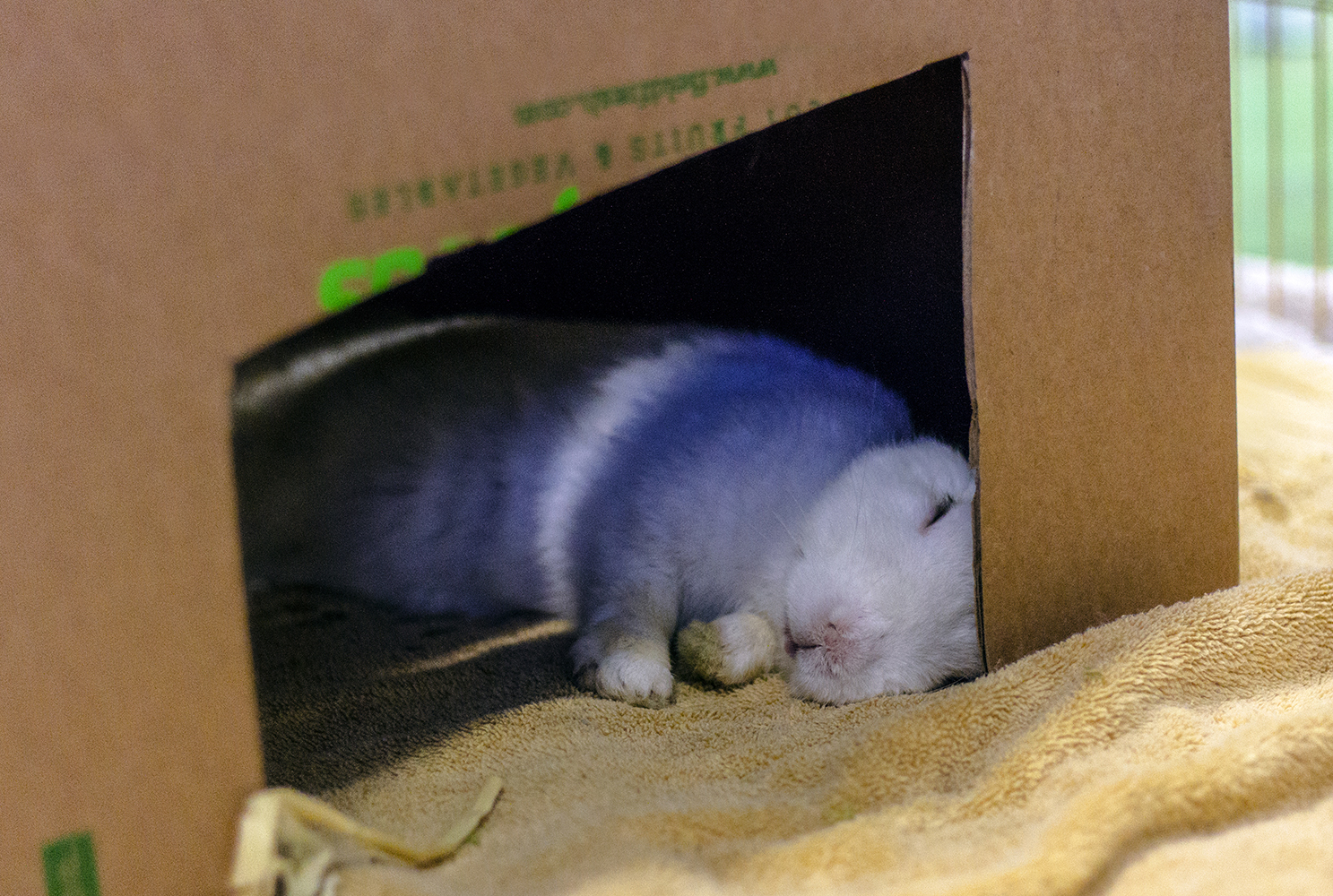 How long it takes for a bunny to bond with you depends on the bunny. Some bunnies will feel at home right away, while others may take weeks or months. It’s important to exercise patience and to respect your rabbit. If the rabbit is terrified to sit on the couch with you, don’t force him. Many people are looking for a “friendly” rabbit - some bunny to sit with you in front of the TV, but most bunnies are not like this. If you will be bitterly disappointed when your bunny watches TV well out of your reach or goes off to do his own thing, you may be better off looking for a different kind of pet. Yes, there are definitely some very ‘dog-like’ rabbits out there, but will you still love your bunny if he just wants to sit in his box all day? If the answer is not a yes, then maybe a rabbit is not the right pet for you.

Level up your rabbit knowledge from novice to expert. Sign up for the monthly newsletter, The Lettuce Letters!